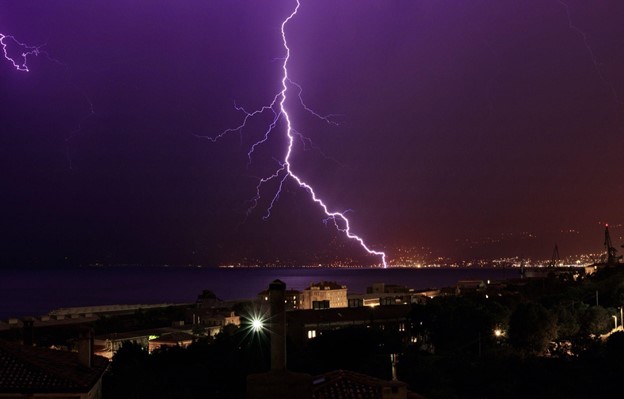 You grew up being told that water and electricity don’t mix. You got out of the pool or avoided showers when a storm was coming. You made jokes about dropping a hair dryer in the bathtub.

What really happens when electricity and water meet?

Why is it so bad?

There are a couple of big problems caused by this deadly duo and it all comes down to the primary fact that water is an excellent conductor of electricity.

So we know that water conducts electricity really well.

Electricity much prefers to travel by water than by air, or even wire. Worse, water doesn’t have any way to prevent electricity from filling the space.

So when electricity, perhaps in the form of lightning, hits a pool or other body of water, it goes everywhere it can. All of the electricity immediately fills the space.

This is bad news for living things in that water, because that means the electricity comes to your body too. So a lightning strike even a few yards from you can be loud and scary when you’re on land, your risk of harm is relatively small. It takes a more or less direct hit to fill you with electricity.

If the lightning were to hit that close to you in the water though, you would feel a lot of electricity coursing through your veins, and you would be lucky to live and tell people about it.

So the first problem is that water spreads electricity everywhere. The second problem makes the first one worse.

Photo by Damir Mijailovic from Pexels

Water can’t say no and absorbs all the electricity

Water can’t say no to electricity. It loves electricity, it wants more. And electricity loves water. So when electricity finds water, it pours all of itself into that space.

So if you were to drop an electric appliance into water, one of the things that happens is it “short circuits”. The part of the machine that tells it to only sip electricity gets hijacked, and it says to the wiring of your house, “I want ALL the electricity.”

Your electric lines, of course, agree. Only the fuse box is there to stop major problems from happening. The fuse should break and cut off the electricity, so you don’t start a fire and get a massive electricity bill.

This is why an electrician puts special switches and plugs in kitchens and bathrooms – they can actually save a life.